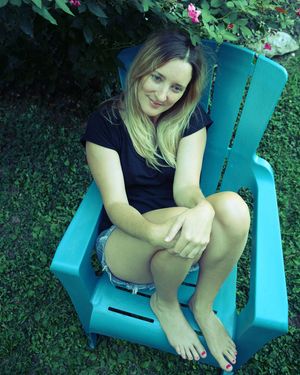 Hey everyone. I wanted to get this blog out before the Halloween weekend and before I head over the big ocean on Wednesday to Norway. So, all you adults out there…what are YOU dressing up as for Halloween?

This week’s blog is about the song, The Ocean, from my new record Make Everything Bright.

I dream about the ocean. Down south to the Gulf of Mexico
That’s where my momma had a baby
I was born in a little town east of the Biloxi wind.

The songs I’ve written about in previous blogs are about relationships, falling in and out of love, family dynamics, and a mid-life crisis or two – or five. This one is about home – the Gulf Coast - where I was born and then lived on-and-off for 15 years. In Ocean Springs (Mississippi), Gulfport (Mississippi), Mobile and Fairhope (Alabama).

Those who have spent any time with me know that I’m truly a child of the coast. I’m either talking about the ocean or figuring out some way to merge music and commerce to get me back there one day.

I love Nashville, but not a day goes by that I don’t think of the Gulf Coast…the ocean, the beach, the people.

I was daydreaming about it all one afternoon about two years ago, and decided it was time to write a song about the place that helped shape me into the person I am today.

The ocean is where the sounds soothe your soul. Whether in a boat or sitting on the beach, eyes closed, listening to the waves. Or it’s that feeling as you walk barefoot through the sand and take that first step into the ocean. Waves lapping over your feet. Drawing at you…with the in and out, like the ebb and flow of life.

It’s incredible the effect water has on people whether it’s the ocean or a river. Especially, when you are born and raised on the water.

I’ve tried the Cumberland River here in Nashville with walks along the greenway. It’s peaceful and a river flows through so many communities as a life blood. I understand that. I see it in places from such as Vicksburg, Natchez, Memphis, and New Orleans. There’s a way about the people from these places. The Mighty Mississippi gives a strength of spirit to those living on the land it flows through and a tranquil relaxation to those watching it roll on by.

But, I’m an ocean girl. The salt. The smell. The different pattern of life in coastal towns. The sight of shrimp boats at dusk as their lights merge with the stars on the horizon. Flashlights of kids floundering at night. Crab nets on the side of decks after the season. And the sound of "throw me somethin’ mister" echoing from Mobile to the Pass to New Orleans during Mardi Gras.

Visiting the Gulf Coast after Katrina was devastating. If you didn’t witness the aftermath, I’m not sure anyone truly understands what happened there, particularly Mississippi. The places I had known since childhood were gone. Neighborhoods were only foundations and streets. However, over the last six years the steel-like resolution to rebuild and comeback by its residents has been as powerful as the ocean that wrecked their lives. That’s because coast people come from the water, whether you’re born in it or come to call it home.

The ocean is the life line of the coast. Waves of water coming in to nourish you and then leaving as the tide takes out with your worries. You are hypnotized by the water. I wanted to create a pattern like that in the music – a vibe that makes you sway a bit, almost a bit 60s psychedelic & hypnotic.

The line “The water comes and goes, like some people that I know” is about the people in your life – friends and family - that like the water, mold and sustain you no matter how long you have them with you. In the video I created for the song, you will notice in the chorus several of those people from my life (my father being one) as that lyric plays.

Memories of my life on the ocean and the beach are just as they are today for many people, I think.

Cruising the beach boulevards. Fishing. Walks in the sand. Football and graduation bonfires. Beach parties. Weddings on the water. And, ashes spread into the ocean. A cycle of life.

Some people never leave the ocean. Like me, many do and long for home.

Sometimes you have to leave to find home again. I know the lighthouse and the ocean, will lead me back – one day.